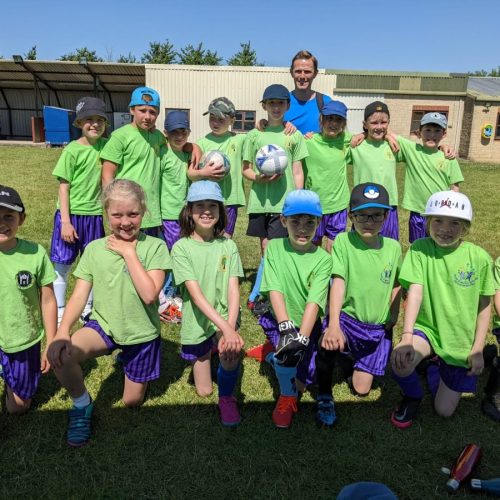 Congratulations to our Federation football players who wore the green and purple with pride last week. Mr. Phillips was very excited to be taking the school football teams to their first tournament this year on Wednesday 22nd June. Both teams gave a very good account of themselves and did extremely well, considering it was the first time they had played together as a team. Here are some write-ups from two of the year 4 players;

“On Wednesday, some children in years 3 and 4 went to Frome Town United to take part in a football tournament. We played 5 matches each. My team played against Mells. In the final game, we went to a golden goal and I scored ,winning us the series. Next, we went to the World Cup. Jacob’s team lost, but then it was our turn. We were 1 goal down in the last 30 seconds. Ted took a long shot and he hit the crossbar! We were knocked out by everyone but the day was amazing and we played great! “ By William

“On Wednesday there was a football tournament where everybody at some point would play 5 matches. We split into 2 teams and battled for a trophy. We didn’t succeed but everybody was a star. Both teams got to the quarter-finals but sadly, both teams were knocked out!” By Jacob